We’ve all been there. There’s just something that your friend, neighbor, co-worker, or relative does that really grinds your gears. It could be something small like a habitual quirk, maybe it was something they said, or maybe their actions caused a whole mess of trouble for you. In any case, whatever they might have done just doesn’t sit well with you.

You could let the incident go. You could write a scathing note about them. Maybe even do something equally annoying to them in return. Or you could beat them over the head with a chair (please don’t do that). Realistically though you know it’s best to just confront the other person and tell them how you really feel. And you decide to do so tomorrow ….. or next week ….. maybe next month …. or never….. Because the sheer thought of confronting someone fills you with terror.

While passive-aggressiveness may be all in good fun, is it really the best approach to resolve conflict? Today’s article is about understanding communication, how conflict arises, the fight or flight response, and the different approaches to resolving conflicts and their effects.

Communication is key to understanding others and yourself. However communication can suffer from misinterpretations and of what I like call “communication etiquette“. It’s sort of the unspoken ebb and flow, or push and pull of a conversation that instill a mutual respect, but sometimes it can quickly become a tug a war. When a miscommunication happens, it leads to a belief that you or the person you’re communicating with has forsook communication etiquette. This in turn leads to a sense of disrespect and the devaluing of someone’s being. When that happens a conflict arises.

Conflict Got you Conflicted?  The Fight Or Flight Response

Sometimes the thought of confronting someone can be so stressful that it creates a “fight or flight (or freeze)” response in the brain. When this happens, your brain and body believe that the confrontation is something threatening and harmful, causing one to avoid or runaway from the threat, to stay and fight the source of the threat, or sometimes even freeze in a state of indecision. Often how we deal with a threat depends on what we learned through past experience.

Retaining the idea of intentionally confronting someone keeps us in “fight or flight” mode,  ultimately inhibiting us from resolving our issues. And the reason we retain this idea is because of our fears concerning the preparedness, initiation, and outcome of a confrontation. Below are common approaches in dealing with conflict, what those approaches involve, and how these methods influence a positive outcome. 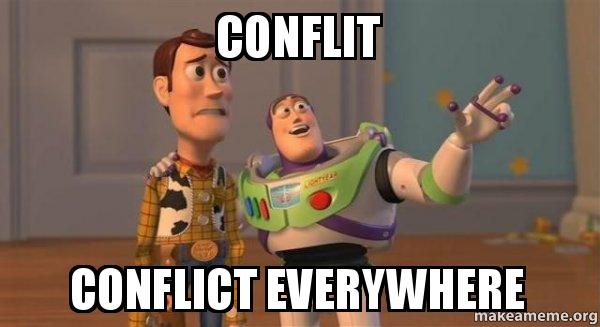 Passivity: The passive approach is non-hostile, non-violent and agreeable, involving a limited level of engagement or avoidance in communication. It can be seen as being compliant, apathetic, aloof, or uncaring. An example of this would be agreeing to the another person’s desires, even if it goes against your own. Being passive essentially takes your needs and feelings out of the equation. Because of this, it’s not the best method to reach a resolution.

Aggression: This approach involves the use of hostile, demanding, or oppressive words or behaviors, with or without the intent to harm. It limits communication by forcefully creating a one-sided solution. An example of this would be when someone demands your compliance without any regard for your input. This method is dismissive to the needs or feelings of others and creates an unstable atmosphere that is not conducive to settling a conflict, and may in fact perpetuate it. It is normally the least appropriate strategy to resolving conflict.

Passive-Aggression: The passive-aggressive route is the middle ground between passivity and aggression which involves behaviors from both approaches. In an article by Psychology Today , some examples of passive-aggressive behavior include the silent treatment and stubbornness. An example of this would be if your neighbor prevented you from parking near his car by putting lawn chairs or trash bins out in the street because he doesn’t want his car to get scratched. Another product of passive-aggression is malicious compliance (which sounds like an epic band name), or an attempt to comply with the expectations of other, but with the intent to cause harm or sabotage any effort at a resolution.

After reading this list of approaches, you may be wondering what the best approach is to resolving a conflict. There are in fact lesser known approaches that are more advantages to consider.

Manipulation: As this approach suggests, it involves indirect action, manipulating a person, their environment, or others closet to a person in order to create an outcome that’s most beneficial to them. An example of this would be if someone were to persuade your sibling to help them convince you to comply with their demands. This method can be seen as distasteful, dishonest, and disrespectful. Although this approach is advantageous to some extent, in the long run it becomes similarto the aggressive approach, ignoring the wants of others and inciting conflict.

Assertion: This method involves being direct, honest, and transparent with your own expectations, feelings, and needs towards a solution, WITH consideration for the wants and feelings of others. An example of this approach would be confronting the person you have a conflict with, talking with them about your concerns, listening to their input and working together to reach a compromise. This is generally the best way to come to a resolution. However other issues may arise if you or the other person isn’t open to compromise.

Often times a combination of these approaches can utilized to varying degrees simultaneously, to enhance a certain method. Like plotting a point on a quadrant:

While the effectiveness of using a particular approach on it’s own is debatable, it’s clear that being assertive is the best course of action in resolving a conflict because it is straight to the point on what each party wants. Still, it can be difficult for some to be assertive due to personal feelings of doubt, social anxiety, fight or flight response, and misconceptions of communication etiquette.

So is it possible to get over that fear? How does one be assertive and why does it matter? How can you be confrontational with out being aggressive? And how does one resolve an issue by being assertive?

I’ll be discussing all these questions and more the next article. Until then, thank you so much for reading, I hope you found the information useful and enjoyable.

Understanding Procrastination & What To Do About It

The Benefits of Playing Video Games